MILLS GEOLOGICAL
High-quality, identified petrified wood and plant fossils from around the globe ​
Order by EMAIL

Osmundacaulis jonesii
Early Jurassic   (182 MBP)
Lune River, Tasmania, Australia
**  This is a triplet of an Early Jurassic tree fern (a very early member of the Osmundaceae - the Royal Fern Family).  It measures 50 mm in diameter and it is approximately 2 mm thick.  This marvelous triplet shows a very nice stem trace along with numerous smaller round rootlets.  The Osmundaceae Family is one of the older families of true ferns that are still represented in extant species in modern day forests.  Some of them are called "Cinnamon Ferns.”  Paleobotanists use the term "false trunk" to describe the central aggregation of frond bases held together by thin strands of hairlike material called ramentum.  It does not grow in diameter annually like the evergreens or broadleaf trees.  The plant sprouts new fronds from the top of the plant (the "crown") which eventually shades out the lower fronds.  Even though the lower fronds die away, their frond bases are persistent enough to continue the job of holding the entire plant erect as it grows taller.

This magnificent specimen was prepared and identified by Ross Jones of Tasmania.  Ross is clearly one of the expert collectors of the scarce Lune River material and is the author of the book Lune River Fossil Fern Trunks,Tasmania published in 2014. The Lune River area that produced the best material is now restricted to surface collecting only, with no digging or tools allowed.  The triplet we offer here is made from some of the very best quality material that has ever come to market outside of Australia. The triplet is essentially a very thin cut slice of fossil fern that has been sandwiched between two plates of tempered glass and subsequently polished into a very thin specimen. Both sides of the triplet are flat polished – they are not en cabochon (i.e. they are not dome polished on either side).  Flat polishing results in thin sections that are simply spectacular under the microscope, especially with transmitted light. (See our photo with the specimen held outdoors in natural light.)  As you can see, they are also very attractive with the naked eye and have been used in spectacular jewelry projects by some collectors!
++++++++++
There is a fascinating story behind the creation of these triplets -- they involve a lot of labor!  Ross told us over a cup of coffee at Tucson several years ago that sometimes lapidary people will try to "steal" his process so they can replicate it.  He laughs and tells them that they are perfectly welcome to know ALL of the details because it is an exceptionally labor-intensive process and he doubts anyone else would have the time and patience for it.  Truly a labor of love. The rarity of the material and the amount of labor involved makes us grateful to have the opportunity to offer his work.
Round triplet 50 mm in diameter, 2 mm thick    $115

​Conifer (Pinales Order) with penetrating rootlets
Columbia Plateau Basalts, Miocene
Sunnyside, Washington
** Fascinating specimen of a conifer limb that was laying on the forest floor and was used as a "nurse log" by dozens of other plants.  It comes from the Utanum Creek area of Yakima Canyon.  This dead and down log must have spent a considerable amount of time in the moist duff of the forest floor eventually becoming spongy enough to allow for the penetration of these rootlets.  Check out the photomicrograph above for a view of just some of these rootlets.  There are some larger penetrating rootlets that are clearly coniferous.  However, it is apparent that many of the really small diameter ones are likely a combination of conifers and vascular plants which are taking advantage of the nutrition potential of the rotting dead and down log.  Many of the penetrating rootlets are only approximately 1/16” in cross-section.   It is always interesting to have specimens that tell their own history. (note that Taphonomy is the paleontological study of the events that happened after death and during the process of fossilization)
3.5” x 2.5” on polished face, 1/4” thick slab  $40 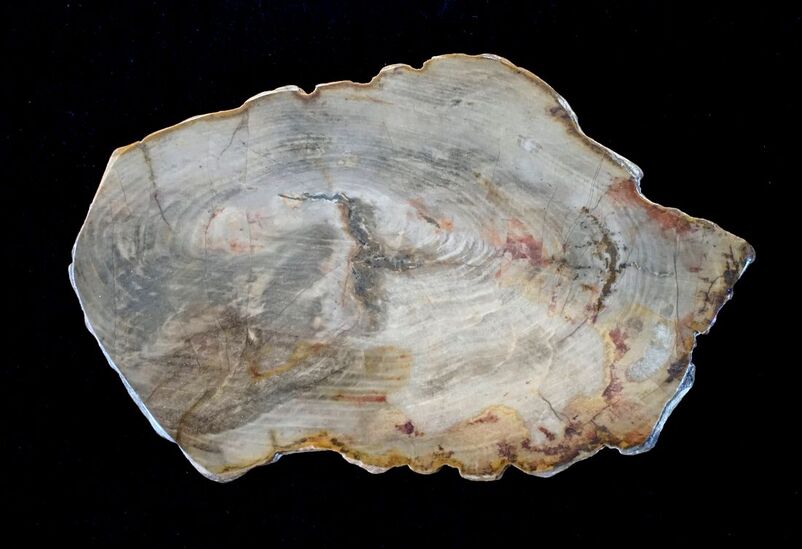 ​Palm trunk (Palmoxylon sp.)
Catahoula Formation  Oligocene
Eastern Texas
** Very nice palm specimen with fabulous pattern in tan, black and white from the Catahoula Formation in Texas.  Notice in our photomicrograph how perfectly preserved each vascular bundle is.  They function as water and nutrient transport channels for palms and each one goes to a specific palm frond.  The leaching by ground water after petrification turns out to be a treat for the petrified wood collector because it has imparted a really interesting pattern to the polished slab -- and there is a good story to tell as well.
8.5” x 6” on polished face; 5/16” thick slab    $125
Willow   (Salix sp)
Grassy Mountain Formation Early to Middle Pliocene
Grassy Mountain, Malheur County, near Vale, Oregon
** Well, we don't see many Grassy Mountain specimens at all any more, and when we do, they are not often as beautiful as this one.  Stunning agatized specimen from the noted Grassy Mountain locality, which has arguably produced some of the most colorful and solidly agatized wood specimens in the entire world.  Mustard yellow, bluish-gray, rust-red accent on the periphery, punctuated by swirls of growth rings, exquisite patterning.  Please also note our photomicrograph of the fantastic woody fine structure that can be found on some areas of this specimen.  This is a gorgeous specimen in a nice, manageable size!  Don't let this one get away.
5.5” x 4.5” on polished face; 7/16” thick slab   $89